F1 Esports Challengers… Event 4 Round up

We. Go. Again! F1 Esports Challengers hits its penultimate event, and the picture for the Pro Exhibition qualifiers is starting to become clearer. Much like last time out, the venues for Event 4 were a proper pair of fan favourites: The ultrafast Autodromo Nazionale Monza in Italy, and Japan’s fearsome Suzuka Circuit, a much-loved test of skill and guile for all.

So, who’s in the best shape after races 7-8? Let’s take a look at what went down in our three mini-leagues. As a reminder, we have three groups of 16 racers (across Xbox, PS4 and PC), with the top six from each group progressing to the Pro Exhibition.

Valentin Bruffer entered this event 42 points off leader Thijmen Schutte. He ended it SIX behind new leader Domenico Lovece. An almost-perfect 50-point romp from Bruffer thanks to back-to-back wins means he’s now the man with momentum ahead of the final Event.

The first race in Monza saw Marcel Altstadt take pole, and a calm and collected drive saw him retain it for 12 laps. Unfortunately, the race was one of 13 laps, and Bruffer stole the lead on the very last lap with a perfectly-timed move on the main straight. Altstadt held on for second, with Mathijs van Erven in third. Points leader Schutte wound up in fifth.

For the second race in Suzuka, one-shot qualifying went Bruffer’s way. However, Schutte stole a march at the start to power into the lead. The pit stops shuffled the pack, but as the pack stabilised, Schutte and Bruffer remained the top two. Bruffer saved his move for the penultimate lap this time round, swooping past on the main straight at the start of Lap 12 to take the win, and eventually the win.

Special mention goes to Domenico Lovece for a fabulous overtake on Schutte around the outside of 130R to snatch P2 at the very end of the race. The move flustered Schutte, who spun and dropped to a disappointing P10 over the line. 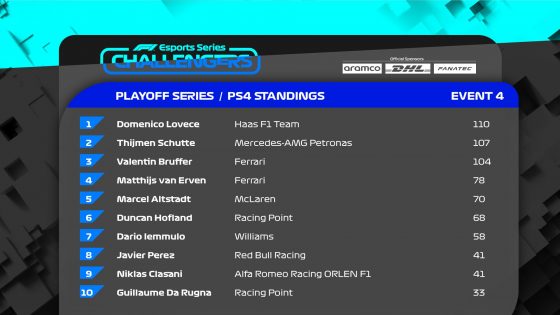 Hardly anything separates the top three with one event to go

Much like the PS4 races, the Xbox standings changed drastically after Event 4. Long-time leader Kedon Lutt held a colossal 36-point lead going into these races, but a score of just six points saw that lead cut to five points, with Christopher Parry and Antoine de Zaluski hot on his heels.

De Zaluski took pole for the Monza race, and the race session greeted the racers with torrential rain. The poleman held on through the tough conditions to take the win, with Jonas Rutten second, and Sam McCabe third, taking his first podium in the championship. Points leader Lutt mustered a P7 finish to build on his tally.

The second race in Suzuka was much drier, so the on-track racing provided the chaos instead. An opening-lap smash between Chandler Sieta, Kedon Lutt and Jaden Munoz put all three well down the order, compromising their races. Meanwhile at the pointy end, Parry was having a whale of a time, leading from one-shot pole to take a superb win ahead of Rutten, with Zak Oates third. 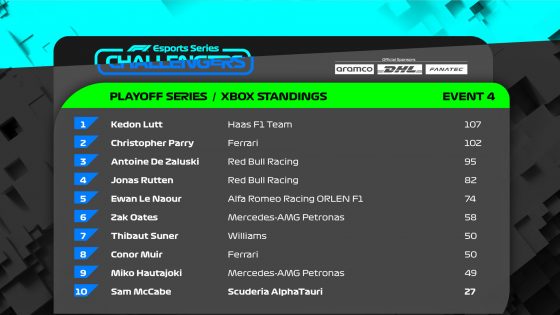 Lutt remains top, but his lead has been slashed

The final of our three streams took place on April 1, but one man who proved he was no fool was Alessio di Capua, who put on a truly dominant display across the two races. His crushing tally of 135 points means he will finish at least third in the PC standings, making him the first guaranteed Pro Exhibition driver from the Challengers.

In Monza, di Capua placed his car straight on pole, just edging out Josh Idowu in second. A huge jump start for Atte Kauppinen caught everyone off guard, and Idowu pounced, taking the lead into Variante Rettifilio. Di Capua did not waste time in resolving his situation though, and re-passed Idowu for the lead on Lap 2. This was to set the tone for the race and indeed the event, with Idowu shadowing di Capua throughout the race, chasing him all the way to the line, eventually crossing the line just four tenths adrift, with Nocolas Mateo right behind in third.

After the photo-finish in Monza, the close racing continued for Suzuka. Di Capua took one-shot pole ahead of Mateo and Idowu. Once again, the battle between di Capua and Idowu was intense, and as Lap 12 began, the Italian made a bold albeit fruitless move into the first corner. He tried again entering the final lap though, and pounced with just one lap to go to make it back-to-back wins, with Sven Knoller completing the podium. 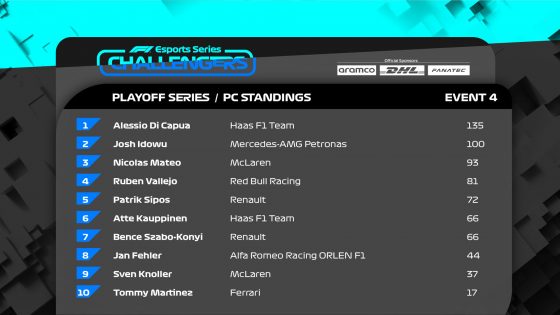 Di Capua’s four wins put him well out in front

Just one round remains, and there are still plenty of unanswered questions. The Pro Exhibition beckons, but our final trio of events across 27-29 April come first, and will decide the 18 drivers who progress once and for all! Join us then, as we go live on Twitch from 19:30.